A historic medical conference in Morocco in recent days brought together local cancer specialists and experts from Israel, all in a Jewish museum.

The three-day event, which concluded on Sunday, was titled “Medicine of Tomorrow, a Bridge to Peace”. Discussions among the 60 participants focused on hopes that the 2020 normalization between Israel and Morocco would spur greater medical cooperation.

It was held in the western coastal city of Essaouira, known for its rich Jewish history and the Jewish Museum Beit el-Dekira (House of Memory), where the gathering took place. the museumwhich opened in 2020, is dedicated to the historical coexistence of the city’s Jewish and Muslim communities.

The event was organized by the Medical Peace Association, a non-profit organization that brings together medical professionals from Israel and Morocco, as well as French counterparts who also attended the event.

One of the Israeli participants, Bar-Ilan University Professor of Immunology, Professor Cyril Cohen, found the event particularly emotional due to his Jewish-Moroccan origins.

“I was very moved to talk about cancer in the land where my parents and grandparents were born,” he told The Times of Israel. “Normalization has made a huge difference, and it makes it much easier to bring Israelis and Moroccans together to talk about how we can help each other with medicine.”

The event was inaugurated by André Azoulay, advisor to King Mohammed VI of Morocco, and one of the country’s most famous Jewish personalities. On Friday night, all participants sat down for a kosher meal on Shabbat, with guests from the local Jewish community.

“We sang in Hebrew, we sang in Arabic, and everyone lived on Saturday, about 100 people—it was great,” Cohen said. 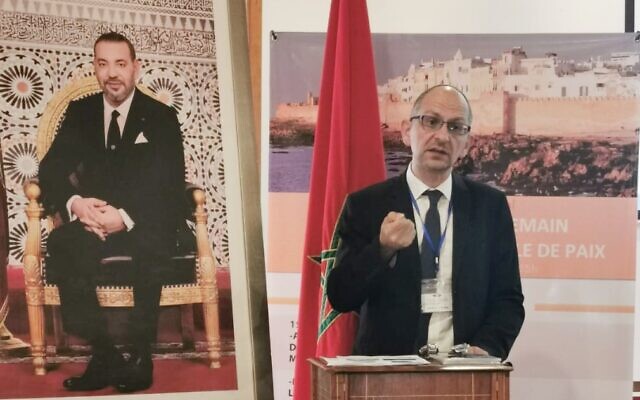 As a leading cancer researcher and president of the Israel Association for Cancer Research, Cohen was one of many presenters. Others include Professor Myriam Ben Hrush of Rambam Health Care Campus in Haifa and Laila Hussein, Professor of Pediatrics at the Faculty of Medicine in Rabat, Morocco.

Cohen said the discussions highlighted how far Morocco has progressed in oncology, and how the time is right to build collaboration.

“Morocco has witnessed a revolution in oncology during the past 15 years,” he said. “Israel is ahead in this field, and it is important to share our knowledge and help the local people there as well as benefit from their expertise. I believe that one of the next tasks will be to generate continued cooperation in the field of cancer research.

We hope that the next step will be to bring Moroccan doctors to Israel, and we are looking forward to that.”

You are a professional reader

We are really glad you read X Times of Israel articles in the last month.

That’s why we started The Times of Israel ten years ago – to provide discerning readers like you with must-read coverage of Israel and the Jewish world.

So far we have a request. Unlike other news outlets, we have not put in place a paywall. But because the journalism we do is costly, we invite readers whom The Times of Israel has become important to help support our work by joining Times of Israel Society.

For as little as $6 a month, you can help support our quality journalism while enjoying The Times of Israel Free adsas well as access EXCLUSIVE CONTENT Available only to members of the Times of Israel community.

Thank you,
David Horowitz, founding editor of The Times of Israel

Already a member? Sign in to stop seeing this