Thomas Lamana was listening last weekend when Dani Garcia broke down in tears as he talked about his mental health challenges. That weak moment was one that Lamana and countless other boxers could handle.

Lamana went to the “dark places” to prepare for fights, but found himself in a dark place of a different kind after losing in the first round by knockout to Irislandi Lara in May 2021. It took ten years of professional fighting to get to this stage, and in 80 seconds he found Himself forced to rebuild from the first step. He fought back, in August of 2021, stopping Felix Bogorques in two rounds, but found that the fight in a bar in Sonora, Mexico was far from the bright lights of a Fox pay-per-view card.

In the months that followed, the middleweight boxer’s weight swelled to 240 pounds, and stress began to affect his family life.

One night, Lamana had hit his first six-figure salary, while at the same time facing a dead end in the one career he had never known.

“I got really hard on myself, I was so disappointed. I got depressed and said damn everything,” recalls 30-year-old “Cornflake” LaManna (31-5-1, 13 knockout) of Millville, NJ.

I took a step back and asked, ‘Do I really need this? Will I get there again? I’m starting to doubt myself.” 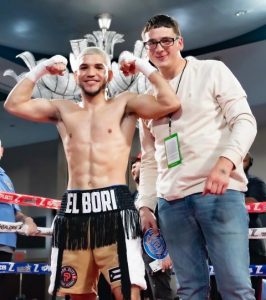 Having fallen to life, Lamana rose to his feet. He married his longtime girlfriend in June and is now scheduled to return to the ring on August 20 at Boardwalk Hall in Atlantic City. LaManna will face a discount to be named on a card they will promote under the Rising Star Promotions banner. The bout will be a ten orbit with a catch weight of 170 pounds, with the plan to fight a few times before the end of the year and return to the middleweight limit.

“I said I should give this one the last shot because I’m not giving up, I won’t stop just because I’m out. I’m going to run it again. Lamana said,

Lamana’s relationship with boxing runs deep. Although his father Vinnie Lamanna was involved in the local scene as manager of heavyweight competitor Ray Mercer, it was Thomas who insisted on pursuing the sport when he was 9 years old. He played around 40 amateur matches, including one against future world champion Jesse Vargas, before turning professional in 2011.

In addition to being the leading boxer selling tickets in the Atlantic City area, LaManna was also one of the most active club show promoters in New Jersey, having founded Rising Star Promotions with the help of his mother Debra, who was a record promoter. Before he can afford the bond for a promoter’s license. The company re-emerged this year with Thomas Lamana as a record promoter, and has hosted shows in Newark and Atlantic City. He also started a series of club shows in Washington, D.C. called Beltway Battles, teaming up with former opponent Dusty Hernandez-Harrison.

Unlike in years past, LaManna now has an entire team to help him organize boxing events.

“When I first started, I literally did everything… match people, medication, licensing, travel, coordination. One time I fought, I collected the ring three days before the event. I went and picked up my opponent from the airport because I didn’t have Anyone help me.”

“Mentally it gets stressful because I work so hard but I think it comes down to believing in the people I helped you with,” Lamana said.

The rest of the card is made up of local attractions, including bantamweight contender Emanuel “Salcerito” Roreguez (11-0, 6 KOs) of Newark, NJ in his first of ten rounds against Frank Gonzalez (9-2, 4 KOs). Other projections in action include Jose Neves (3-0, 2 KOs) of Woodbridge, NJ, Kurt Scoby (7-0, 5 KOs) of New York and Anthony Jones (3-0, 3 KOs) of Newark.

Despite LaManna’s importance to the local scene, he still has bigger plans for himself.

“The whole plan is global, not local. I touched the world stage that night, it was psychedelic. I was more than ready to be a hero that night [against Lara] I will get there again. “This time it will be a different outcome,” Lamana said.

Ryan Songlea has written for ESPN, New York Daily News, Rappler, and The Guardian, and is part of the 2020 Craig Newmark Graduate School Journalism class. It can be accessed at [email protected]